Why Do Cats Purr? Is it Just Because They’re Happy? 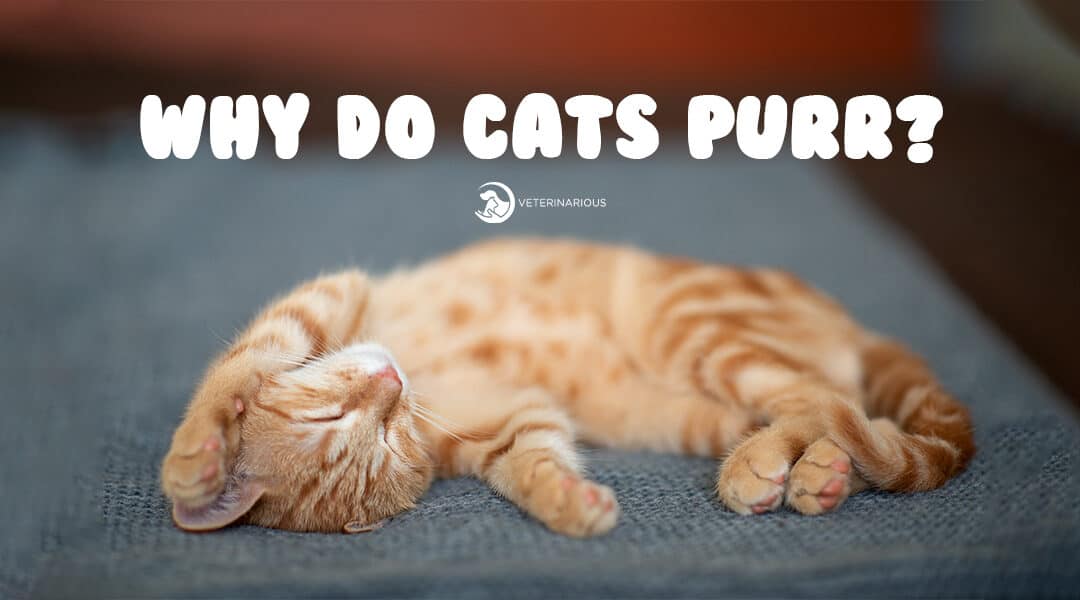 Why do cats purr? Have you ever wondered?

For cat people, curling up with your furry feline, slinking your fingers through her fur, and hearing that contented purr is music to the ears. It’s well known that cats purr when they’re happy. It’s a calming sound and we usually take it to mean they’re comfortable and feeling good.

But that may not always be the case.

So other than happiness, why do cats purr?

What is that Sound?

What exactly is a purr? Experts now say that purring begins in the brain, when a rhythmic, repetitive neural oscillator sends messages to the laryngeal muscles, causing them to twitch at the rate of 25 to 150 vibrations per second (Hz). The tightly connected linkage of delicate bones running from the back of the feline tongue up to the base of the skull. When in a purring frame of mind, a cat vibrates its larynx, which in turn sets the twiglike hyoid bones to resonating.This causes a sudden separation of the vocal cords, during both inhalation and exhalation. Result? That distinct feline purr.

Are domestic housecoats the only cats who purr? Nope. Some wild cats and their near relatives also purr. Even hyenas, guinea pigs, and raccoons can purr. Large cats, like mountain lions, cougars, and bobcats also purr.

What about lions, tigers, and jaguars? Maybe they would if they could, but only smaller cats have what it takes to purr. The structures surrounding their larynx aren’t stiff enough to produce a purr. But, they can roar – whereas your cat can’t – so that sounds like a fair trade-off to us.

Why Do Cats Purr?

Why do cats purr? No one is certain exactly why, though there are several theories, and even some research to back them up! Check this out:

A Sound of Smiling

Yes, cats definitely do purr when they’re happy. That’s not some well-perpetuated myth.

Is it Dinner time?

Some cats purr when they’re hungry.

In fact, British researchers studied the sounds that cats make when they’re hungry and when they’re not. The purrs don’t actually sound the same. Hungry cats add a bit of a ‘mew’ to their purr, something that sounds sort of like a baby crying. Experts suggest this is done because it tends to sound more urgent, and even a little annoying, so those “hunger” purrs are done to illicit some time of action on your part!

To Relieve Pain and Stress

Purring is considered a way for a cat to soothe herself. When stressed, a cat might purr for those soothing vibrations. And yes, that could mean your cat is purring when you pick her up because she’s stressed – not because she loves being in your arms! Watch that body language.

Also, many cats purr when they’re hurt or in pain. They purr when in labor, when ill or injured, or even when near death. In addition to the low frequency vibrations being soothing, they can also heal bones and wounds, build and repair tendons, ease breathing and decrease pain and swelling! It’s also been shown that purring can help with bone regeneration – how cool is that!

Read This Next: It can sometimes be hard to tell when your cat is in pain. These are some signs to watch for.

Adult cats are not the only ones who produce that calming purr. Kittens can start to purr at only a few days old, and experts believe this ability developed as a way for them to let their mothers know where they are or that they’re OK. Purring also helps strengthen a kitten and mother bond, and mother cats use purring as a lullaby.

Good for the Goose…

And just to end on a positive note, that purring is not only healing for our feline friends, it’s also good for us!

Cats are the number one pet in the U.S., where 60% of homes have at least one pet. And part of that could be because of their assistance with lower stress and blood pressure. Purring may just help with that.

When a cat purrs, especially when you’re curled up together, that sound gives us a feeling of peacefulness and calmness. For us, this positive reinforcement increase the relaxation effects we feel when we’re with our cats. It gives us positive vibes, which in turn help relieve our stress and improve our mental health and wellness.

Sounds purrfect to us!