What to Do if Your Dog Eats Chocolate (How Much is Too Much)? 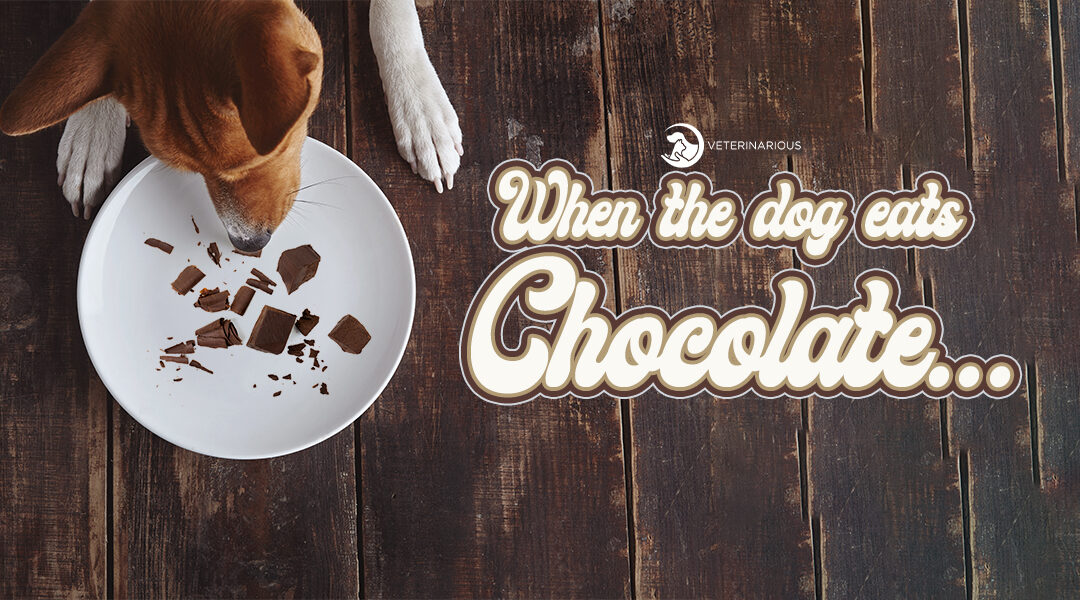 What happens when a dog eats chocolate?

Growing up, we had a beautiful, lovable, goofy golden retriever named Callie. She was an inquisitive sort, and could nose around with the best of them. And that nose sometimes got her into trouble.

I can remember when I was a kid, our parents would keep our stocking stuffers in a bag in their closet. The closet was always closed, and the bag was tied shut. However, one day, either by accident or Callie’s design, that closet was opened, the bag untied, and 3 good-sized chocolate letters rummaged out of their packages and gobbled up.

My parents were suitably panicked by this occurrence, and promptly rushed her over to the vet. Luckily, Callie was fine, and from then on the stocking stuffers were hidden away in a different spot.

Most pet parents know that when a dog eats chocolate it isn’t a good thing. So how much chocolate is a concern, and what can you do if your dog gets into those presents (or any other type of chocolate)?

Why is Chocolate Such a Concern?

The biggest problem with chocolate is that it contains caffeine and a chemical called theobromine.

Both chemicals are stimulants called methylxanthines, and they’re used medicinally as diuretics, heart stimulants, blood vessel dilators, and smooth muscle relaxants for people. The thing is, our dogs can’t metabolize theobromine and caffeine as well as we can. That is why dogs are more sensitive to the chemicals’ effects. Theobromine mainly affects a dog’s guts, heart, central nervous system, and kidneys.

The caffeine and theobromine are the big issues, but not the only ones. The high sugar and high fat content in most chocolate products are not only uncessesruy, they can be troublesome. Fat, for example, can lead to pancreatitis.

If your dog eats chocolate, these are the signs of chocolate poisoning to watch for:

Signs of chocolate poisoning usually appear within 6 to 12 hours.

If you’re concerned, even a little bit, whether you’ve seen these symptoms or not, talk to your vet. They’ll be able to advise you on whether you need to come in or not. Don’t hesitate. If you’re worried, go.

[RELATED] When it comes to sweet treats, you also have to be very careful of Xylitol, a common sweetener. Here’s why.

How Much is Trouble if Your Dog Eats Chocolate?

While many responsible pet owners are so careful with their dogs, they can’t keep an eye on them all of the time. It only takes a second for a dog to get into that candy bowl or plate of chocolate cookies. But, if your dog somehow snagged a bit of chocolate, don’t panic quite yet.

Your dog’s size and breed and the amount and type of chocolate they eat are what you first need to consider.

In general, mild toxicity is seen at 9mg of theobromine per pound of dog, and severe toxicity is seen at 18 mg theobromine per pound of dog. For example, if an average Hershey’s Milk Chocolate bar is 1.55 ounces, one chocolate bar can have serious consequences, especially for small dogs. Eating a crumb of chocolate cake or a very small piece of a chocolate bar, on the other hand, probably won’t kill your dog, especially if it is a larger breed.

For example, here are some common chocolate items and the amount of theobromine they contain:

Take notes to be able to tell your vet about how much chocolate you think your pet ate. This can help them get a better idea of what the situation at hand is.

At Home Measures if Your Dog Eats Chocolate

Is there anything you can do at home if your dog gets into the chocolatey treats? Yes. A call to your vet is always a good idea, and it is always helpful to get their advice on which route to take.

If your dog eats chocolate, it’s important to get it out of his system quickly. And you can help that along with a few different things, namely hydrogen peroxide and activated charcoal.

You need your dog to swallow the hydrogen peroxide, so use a syringe to squirt it as far back into the throat as you can. Hold your dog’s mouth closed and rub under the chin and throat. Wait 15 minutes and if she doesn’t vomit, give one more dose, but that’s it.

Activated charcoal works by blocking absorption of theobromine into the body. You can give it every 4 to 6 hours for the first 24 hours. That stops the theobromine from becoming reabsorbed and recirculated.

Give 1 to 5g per kilogram of body weight depending on the amount of chocolate you dog ate. Try to start this as soon as possible – it’s best if given within an hour of eating the chocolate. The best way to give it is to mix some with yogurt, sprinkle it on some food, or whatever you can do to get her to eat it. You can also give it with water in a syringe. Squirt it in as you would for hydrogen peroxide. Give it a little bit at a time. Giving it by mouth is a last resort as she can choke and it can get into your dog’s lungs. If your dog has no signs of chocolate poisoning, add it to her water bowl.

For many of us, chocolate is a comfort food and a sweet treat we all love. But when it comes to our dogs, it should never be given as a treat, not even a taste. So, keep those stockings out of the closet, the chocolate cake off the counter, and the chocolate kisses away from curious noses.