Should You Let Your Dog Sleep with You? 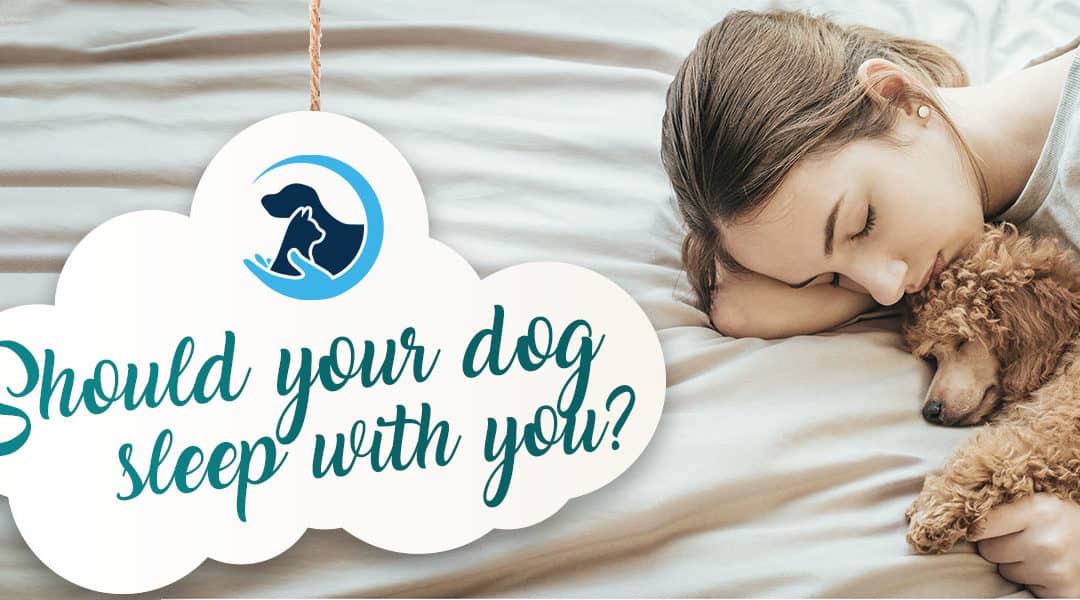 For centuries, domestic dogs have slept in the same bed as their human companions. But we bet you’ve heard at least once before that this is a no-no. Should you let your dog sleep with you?

At our house, we have 2 pups. The older one, a husky (and the far more independent of the 2), likes to watch over the living room furniture at night. The younger one, a Shepherd, starts off in the bed, snuggled in with her stuffy. Sometimes she stays curled into our legs all night. Sometimes she moves to her couch (yes, her couch) at the end of the bed, and in the morning hops back up in the bed for some snuggles. For us, a dog in the bed is just a regular nighttime occurrence (and I wouldn’t have it any other way).

Apparently, we’re in good company. In fact, the American Kennel Club surveyed pet owners and found that almost half (45%) of American pet owners share their bed with their furry family member. The rest tuck their pups into a crate or a doggie bed at night.

That said, not everyone feels the way that we do, and so it’s only fair to run through the (supposed) cons before we share the positives. (Can you tell which side I’m on?) So, let’s get started.

Dogs in the Bed: The Cons (Boo)

There are those that are against sharing the bed. There are a few different main reasons naysayers say no to “should you let your dog sleep with you”:

There’s still a belief held by some trainers that letting your dog sleep with you will lead to bad behaviour. These trainers argue that allowing your dog in the bed will elevate his pack status above your own. This can lead to dominant behavior (often displayed as disobedience). Some say that allowing your dog to sleep on the bed can lead to issues with aggression, or separation anxiety, but there’s actually nothing that proves one leads to the other.

If there are behavioural issues, they likely existed before your dog joined you to sleep at night. For a well-adjusted, well-behaved dog, it’s unlikely that sleeping in your bed will do anything to cause bad behaviour.

One major factor for this is sleep. We all know that a good night’s sleep is important for good health. Sharing your bed with your dog may mean you’re battling for space, and yes, that can lead to restless or poor sleep. That said, research shows that owners who share their beds with their dogs tend to fall asleep just a few minutes later (4, on average) than those who don’t. And while they’re more likely to wake up tired, the tiredness doesn’t last throughout the day.

What about allergies? Ok, this is one we can’t really argue against. If you’ve got pet allergies, you probably shouldn’t sleep with Spot, or even allow him in the bedroom.

Ready to get over the top? The plague…. yes, the plague! We may not be in Medieval England, but the bubonic plague does still exist. This is really a reason some back up the belief that your dog shouldn’t sleep with you. And, although the risk is really, really minor, there is a very slight (I can’t emphasize that enough) chance that your buddy will pass along the plague. Bubonic plague is transmitted by fleas, and since 1974 there have been cases of plague reported in the U.S. After an outbreak in 2008, researchers did discovere that people infected were more likely to share a bed with a dog than uninfected counterparts. Note: In recent decades, an average of seven human plague cases have been reported each year. Told you the risk was super low.

Ok, ok, stop fretting, we’re getting to the good part!

Dogs in the Bed: The Pros (Yay)

According to recent research, there are many benefits to co-sleeping with your dog, and there’s nothing to be ashamed of if you share your bed with your furry friend.

Sharing a bed with your pet can make you feel safer at night, both emotionally and physically. Many owners agree that sharing your bed with your dog gives you an added reassurance that no matter how deeply you sleep, the dog’s super-sensitive hearing will pick up any disturbances – including someone sneaking around outside or at the front door.

This is good for your sleep. Feeling less fearful when you go to bed means you can rest easier.

It’s well documented that pets naturally soothe anxiety. Pets promote feelings of calm and relaxation, and this can actually help settle anxiety if you have trouble sleeping.

It goes beyond regular stress too. A recent study found that people suffering with Post Traumatic Stress Disorder found sleeping with a pet helped to diminish nightmares! That’s significant, since as many as 70% of those with PTSD have nightmares on a regular basis.

And about that sleep thing, while some believe pets disrupt sleep, research also supports the opposite theory. In fact, a 2015 survey found that 20% of pet owners described their pets as disruptive at night, whereas 41% perceived their pets as unobtrusive or even beneficial to sleep.

it can strength the human-animal bond. Your pet likes to be near you, so sleeping together makes them happy, too. In the wild, dogs live – and sleep – in packs, so it makes sense that domestic dogs often feel the same way, looking to you as the pack leader for comfort and companionship, both during he day and at night.

A stronger human-animal bond isn’t just about loyalty and knowing your pup loves you. It’s actually really important for socialization and training. A strong bong helps build trust and that can significantly help when it comes to training.

Just touching your pup raises the level of oxytocin in your brain. That’s the happy hormone. It makes you feel good, which can reduce stress. A snuggle with your dog at the end of a long day just makes you feel better. Curling up to sleep with them can just prolong this feeling.

And back to that oxytocin. It’s not just happy feelings that are good. The release of oxytocin promotes theta brainwaves, which occur during REM sleep.

Final Thoughts: Should You Let Your Dog Sleep with You?

Sure, there may be reasons some people opt not to share the bed with their furry family member, but there are also some positives. Having your dog in the bed can help you relax, and also strengthen the bond between you and your pup. And we can’t forget about how it feels to have that snuggly ball of fur cuddled up with you.

In the end, it should be up to you and what works for you and your dog. So if you choose, go ahead and sleep with your dog – it’s perfectly safe as long as you’re both healthy.