Seafood for Cats: Should We Throw Back the Catch? 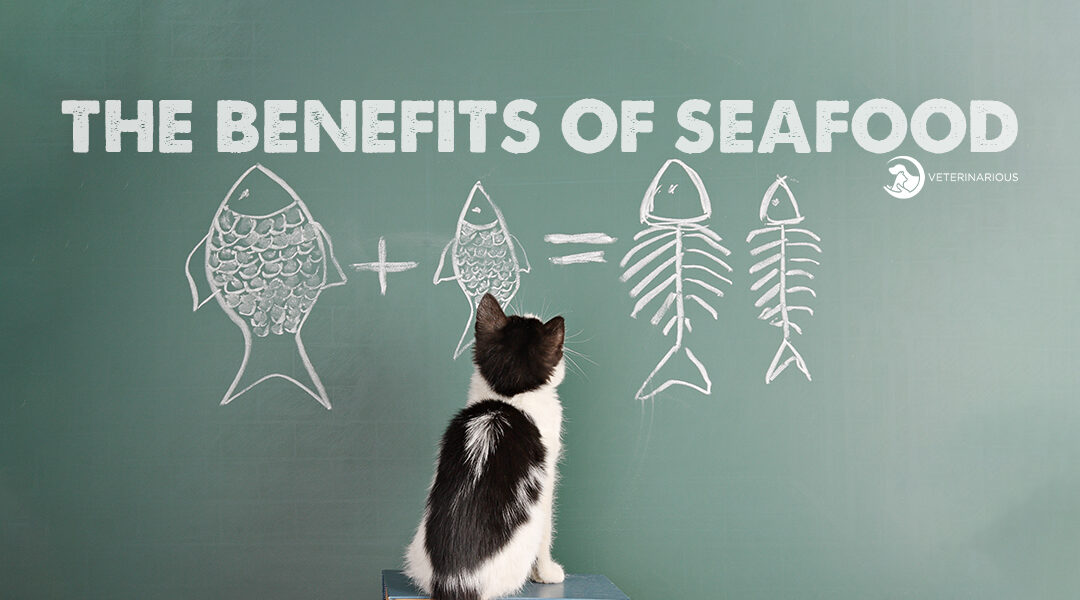 We’ve all seen the tins lining pet food store shelves… tuna, salmon, you name it. In fact, it can often be tough to find processed cat food (kibble or canned) that doesn’t contain some type of food from the sea.

And think about those cat cartoons. How often do they feature a cat carefully watching the family goldfish swim around the bowl.

We’ve been conditioned to believe that cats are huge fans of fish (and most are), and that it should probably be a big part of any kitty’s diet. But is that what the science tells us? Are there benefits to feeding seafood for cats, and are there times when you should be crossing it off the list?

The Benefits of Seafood for Cats

Now, fish isn’t really species-specific, but that doesn’t mean it’s a total no go. In fact, there are several benefits to having fish in your cat’s diet.

First off, fish is a great source of protein, and that protein is very usable in a cat’s body. It also has the right amino acids – the components of protein – in a good ratio that your cat needs them. Protein (from a variety of sources) should form the majority (if not the entirety) of your cat’s diet.

Seafood also contains essential omega-3 fatty acids, which many cats lack in their diet. Omega-3s are a type of essential fatty acid. There are actually 11 different types of omega-3s, but the ones that tend to have the most benefit (for both humans and pets) are DHA (docahexaenoic acid) and EPA (eicosapentaenoic acid), both of which can be found in marine sources.

Omega-3 supplements have many of the same benefits for cats as they do for their human owners, including:

Now, we’d be remiss to have a post about seafood and only cover fish. After all, the ocean is filled with far more than just fish!

As you can see, when it comes to seafood for cats there are lots of healthy options that you can rotate into a balanced diet.

But… you don’t want seafood to make up the entire diet. Here’s why…

[RELATED] Want to make the move to a fresh food diet for your feline friend? Here are some tips to make it easy.

Why Seafood for Cats in Moderation

As mentioned above, it’s often hard to find processed cat food without fish. That’s because, alongside chicken, it’s one of the cheapest mass produced protein sources available. Unfortunately, fish, more specifically fish in processed kibble and canned food, isn’t of the highest quality. So it’s not like you’re getting human-grade, high quality fish in that bag or tin.

Now, mercury is found naturally in air, water, and soil. It’s released into the environment in several ways, including through industrial processes like burning coal or natural events like eruptions. You (and your cat) can be exposed to mercury by eating seafood because these animals absorb low concentrations of it due to water pollution.

Over time, methylmercury – the organic form of mercury – can build up in their bodies. Methylmercury is highly toxic, causing serious health problems when it reaches certain levels in your body. The amount of mercury in fish and other seafood depends on the species and the levels of pollution in its environment. Unfortunately, though, it isn’t a rare phenomenon.

Overall, the larger the fish, the higher the concentration. So the big guys like shark, swordfish, tuna, marlin, and king mackerel should probably be off the list.

Additionally, fish is one of the most common allergens for cats! If you’re noticing your cat is itching more than she should be, has runny eyes or a runny nose, is chewing her paws, has dull, brittle fur, or has frequent episodes or vomiting or diarrhea, you might want to consider if fish is the culprit. Eliminating an allergen from the diet (in this case, fish) can help relieve those symptoms, and often the body just needs a good, solid break to get back on track.

So What’s the Answer?

Small amounts of fish in moderation are great. Our go-to is sardines (in water, not oil), as these are small fish that don’t eat larger fish, and thus tend to contain fewer heavy metals than their larger fish-eating cousins. A few times a week, just open a small tin and crush those babies up and mix them in.

As for serving whole, large fish (either cooked or raw), processed food made with fish, or fish-flavored food, perhaps cut back on those options. You want to keep the diet balanced and reduce the risk of an overabundance of heavy metals in the diet. And rotate those proteins! Instead of sticking with the easy, go-to ingredients, like fish and chicken, work in some other proteins for variety. This will help reduce the risk of your animal developing an allergy to those proteins, will add some different flavors to spice things up (you wouldn’t want to eat the same thing every day, would you?).