Is Roundup Safe for Pets? The Dangers of Glyphosate 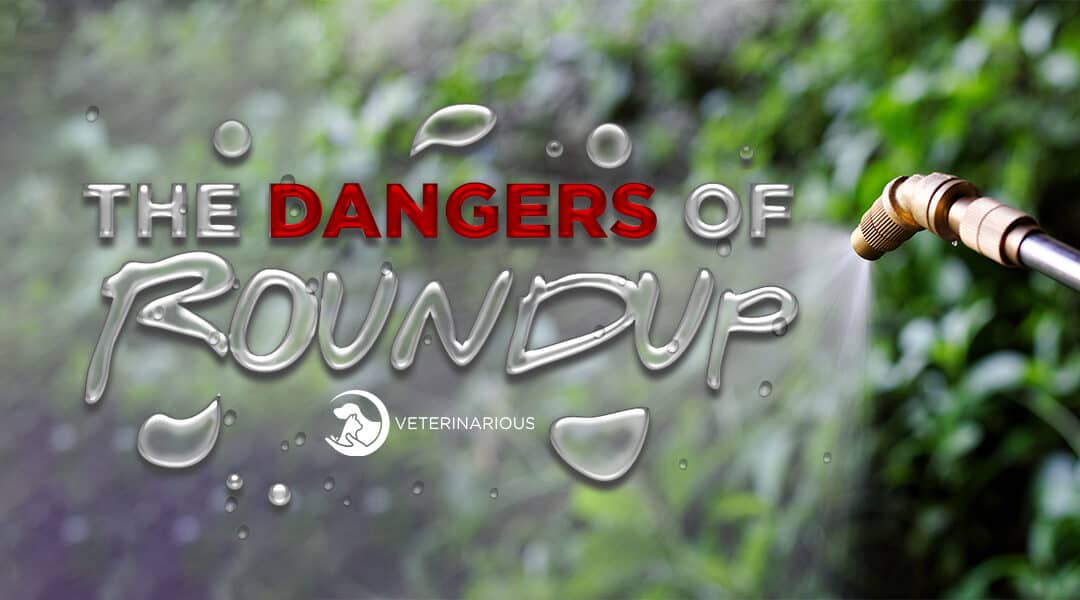 Weeds, weeds, weeds: to some, they’re nothing more than troublesome plants that need to be gotten rid of. And to get rid of them, many turn to commercial weed killers like Roundup to get the job done.

It’s such a commonly used weed killer, on both regular neighbourhood lawns and major commercial farms. But, is Roundup safe for pets?

Let’s take a look at the use of Roundup, glyphosate, and how these can impact the health of our animals.

Roundup is the brand name of a systemic, broad-spectrum herbicide produced by Monsanto. It was originally produced for mass-scale farming, but it is now available for personal use in home and garden versions and has become a popular household weed killer. You’ve probably seen it (or a version of it) at your local garden center.

Glyphosate, the main ingredient in Roundup, is a non-selective herbicide, which means it will kill just about any plant it comes into contact with. After it is applied, the plant absorbs it and it passes through the plant down to the roots. It kills plants by preventing them from making certain proteins they need to grow. Without these proteins, plants die in a matter of days or weeks.

For years, Monsanto ruled the glyphosate world, but their patent expired in 2000. This allowed other companies to begin making and marketing herbicides containing glyphosate, and by 2015, more than 750 products made with it were available in the United States.

Glyphosate is widely used on fruit, vegetable, and cereal crops, and ornamental plantings, but corn and soybean crops account for about two-thirds of the pesticide’s use every year.

Glyphosate is the most widely used herbicide in the United States. About 100 million pounds are applied to U.S. farms and lawns every year, according to the EPA.

Is Roundup Safe for Pets?

Is Roundup safe for dogs?

Let’s start with this: “Exposure to glyphosate — the world’s most widely used, broad-spectrum herbicide and the primary ingredient in the weedkiller Roundup — increases the risk of some cancers by more than 40 percent, according to new research.”

That’s taken directly from a 2019 study.

But it has also been linked to:

And yes, to be clear, there is a ton of debate between various health organizations – at both ends of the spectrum – about the health impacts of glyphosate. Some say there’s no evidence to suggest it’s harmful. Others say it isn’t harmful after a certain period of time. Still others say it is incredibly harmful. But despite the debate, the limited research that does exist is enough to tell us that Roundup (glyphosate) isn’t something we want around our animals.

But they’re around it anyways!! According to research, glyphosate levels in dogs can be as high as 50 times the levels in the owner. How are our pets exposed to these chemicals? By walking on lawns sprayed with them, eating food that’s been sprayed, or even just being in the general area after spraying can all cause exposure.

Numerous cities, counties, states and countries throughout the world have taken steps to either restrict or ban the use of glyphosate, Roundup’s main ingredient. Unfortunately, the United States isn’t on that list.

[RELATED] Want to create a pet-safe garden? Follow these tips!

Not Just that Glyphosate…

If that weren’t enough, it isn’t just the glyphosate in Roundup that’s the problem.

Roundup (and other glyphosate-based herbicides) contain other ingredients that are highly problematic.

Federal law classifies all pesticide ingredients that don’t harm pests as “inert.” Inert compounds, therefore, aren’t necessarily biologically or toxicologically harmless – they simply don’t kill insects or weeds. These ‘inert’ ingredients include solvents, preservatives, surfactants and other substances that manufacturers add to pesticides. Nearly 4,000 inert ingredients are approved for use by the U.S. Environmental Protection Agency.

And research shows that these ingredients can be far more toxic than glyphosate!

In fact, a 2018 study found that glyphosate was not the major toxic compound in the herbicide formulations. Petroleum-based compounds in herbicides were far more toxic. This same study found arsenic, chromium, cobalt, lead and nickel in pesticide formulations – all of which can be kept from ingredient lists because they’re considered ‘inert.’

Ummmm, no thank you!

And Not Just Pets…

We’re animal lovers here. And not just dogs and cats – all animals. And we include insects on that list.

By now it has become common knowledge that bees are an important part of the world’s ecosystem. Without them, serious impacts to our health and wellbeing would be the result. So we’re always trying to look for ways to protect them.

Unfortunately, Roundup has be found to be a cause of major decline in bee populations around the world.

Contact exposure to either consumer or agricultural Roundup products at label recommended concentrations can cause high levels of mortality in bumblebees and that the co-formulants like surfactants in these roundup products, not the active ingredient glyphosate, are driving mortality.

The study notes, “Given the hazard demonstrated here with all tested Roundup® products, and the extensive exposure of bees to such GBHs [glyphosate-based herbicides] world-wide, GBHs may pose a high risk to bees, and thus may be an as yet unidentified driver of the bee declines that are occurring around the globe.”

Is Roundup Safe for Pets?

So, is Roundup safe for pets? Whether we’re talking about glyphosate specifically, of the myriad other ‘inert’ ingredients, the answer will always be no.

To keep our pets, ourselves, and the bees, safe, please, please consider ditching that chemical-filled herbicide. There are many pet-safe and environmentally sound products on the market that are far less dangerous. Or, perhaps it’s time to embrace those weeds and let Nature decide what belongs in the garden and what doesn’t!