IBD in Cats: What is it, What Causes it, and What Can You Do? 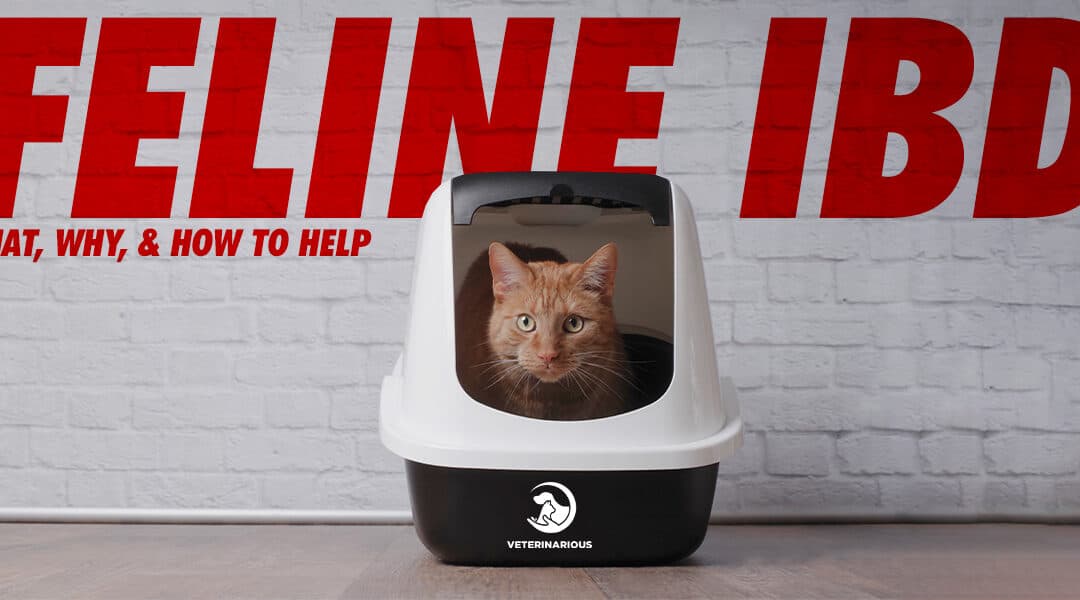 You notice it once – the contents of the letterbox are a little runnier than normal. You write it off as a one-off. Then you notice it again. And again… is this an issue?

IBD in cats is a fairly common condition. It’s one that many cats suffer with, on and off. So what is causing this, and what can you do to help your kitty?

What is IBD in Cats?

The most common symptom of IBD is diarrhea or soft stool. Some cats may also vomit. These episodes may be intermittent, coming and going, on and off.

Some of the other common symptoms of IBD in cats include:

If you notice these things, it’s time to take action.

Unfortunately, little is known about what causes IBD in our furry friends.

What we do know is that it is autoimmune related and some forms may be genetic. Antibiotic usage, an immune system malfunction, and changes in the microbiome (the community of bacteria, viruses, and fungi in the GI tract) have all been suggested as possible causes.

Some have also speculated that it may be caused by a hypersensitivity to bacteria, but the science is still being done.

Any cat (or any breed of dog for that matter) can get IBD. It tends to be more common as cats get older, but it can occur at any age.

How is IBD Diagnosed?

The first step in the diagnosis of IBD is making sure it isn’t something else. Your vet will want to exclude parasites, dietary sensitivity (a true food allergy or dietary intolerance), infectious diseases, digestive tract cancers, and other diseases that may cause similar symptoms.

This diagnosis may include blood and urine tests, and an abdominal ultrasound. It may also include other testing, such as an endoscopy, or even an abdominal exploratory, depending on the severity of your cat’s symptoms.

IBD in Cats: Can You Help Your Furry Feline?

While many cats only have intermittent bouts, it’s important to keep the IBD under control at all times. The lack of healthy digestion is a common cause of secondary infections in cats. Remember, compromised intestines lead to a compromised immune system, and since over half your cat’s immune function is located in her GI tract, you need to keep it healthy.

As we mentioned, when your cat has IBD, it means her intestines are inflamed. IBD is manageable, but unfortunately it isn’t curable. IBD is a chronic disease. While your vet may recommend various treatments, know that there are not actually curing the IBD. Luckily, there are several ways to naturally reduce the inflammation and therefore help manage the flare-ups. We recommend working with your holistic vet to create a custom plan to meet your kitty’s individual needs. Usually, a custom plan will include the following:

For cats with IBD, a bland diet is best. You want to feed soothing, but nutritious, foods that provide the body with nutrients without causing any further upset. This might mean turkey or chicken, because they’re nice and lean, and even some pure pumpkin because it helps sooth the digestive tract. Stay away from grains, carbs, and high fat foods.

Novel proteins (proteins your cat doesn’t normally eat) may also be recommended to give the digestive system a break. Again, your holistic vet can recommend some good choices. Work with them to create a balanced, non-inflammatory diet.

There are several supplements you can also add to help keep the digestive system in check. Once again, your holistic vet will help determine the best ones.

Slippery Elm is a large, deciduous tree native to Eastern North America known for its mucilaginous, strengthening, and nutritive properties. Slippery elm is a master demulcent. It exerts a soothing effect on mucous membranes of digestive, respiratory, and urinary tracts. It is also used for protecting against stomach and duodenal ulcers, for colitis, diverticulitis, GI inflammation and acidity.

Colostrum comes from mother’s milk and is the first defense for newborns against foreign pathogens. It contains antibodies (immunoglobulins) that stimulate and strengthen the immune system. Colostrum also contains high quality protein and growth factors that promote the development and proper functioning of the gut.