Dog Dementia: How to Recognize the Signs and Support Your Pup 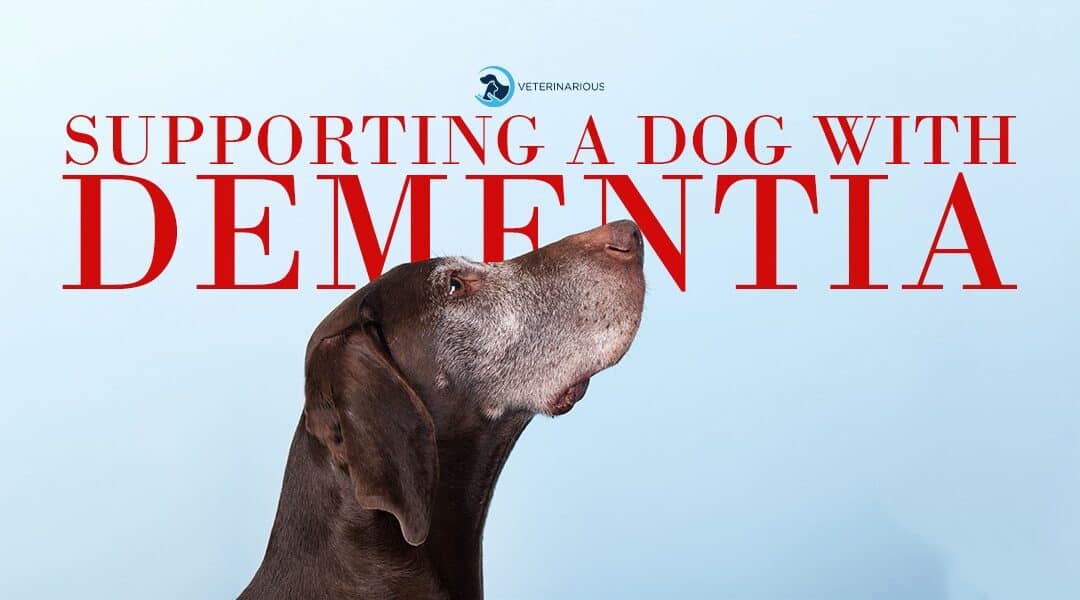 We have a 13 year old pup who, over the last few months, started exhibiting certain signs that suggested she had dog dementia. She lost her hearing in the last year and a half, so initially we attributed some of the symptoms to that, as well as her advanced age, but looking more into things, we discovered that her symptoms were more akin to something other than just hearing loss. A trip to the vet to rule out any other issues confirmed the diagnosis.

Before this point, we knew a little, but not a lot, about canine dementia. And we quickly discovered we were not alone.

Like humans, as dogs age, they can experience declines in memory, learning, perception, and awareness. But what exactly is dog dementia, what causes it, how can you determine if your dog is experiencing cognitive decline, and how can you support your senior if they start to display symptoms?

What is Dog Dementia?

Dog dementia, also called canine cognitive disfunction, is like the dog version of Alzheimer’s. It’s actually a term that encompasses four different neurobehavioral conditions that lead to a decline in cognitive function.

As with human dementia, the exact causes of dementia in dogs are not known, but researchers suggest that accumulations of sticky proteins called beta-amyloid plaques around neurons and the breakdown of neurons resulting in so-called neurofibrillary tangles are the main contributing factors. Both of these affect the brain by interrupting nerve impulse transmission, and both occur as a normal part of the aging process. Genetic factors or other diseases like brain tumors and brain trauma may also predispose an animal to develop dementia.

How common is it? Well, although most pet parents attribute the symptoms of dementia to aging in general, it is fairly common. In fact, estimates put cases anywhere from 14% to over 60% in dogs over eight years old. And, research shows that the risks increase with age.

NOTE: Cats can also get dementia, and it is even more rare for it to be recognized for what it is compared to dogs.

Early identification is best, so how can you tell if your dog has dementia? There are certain signs that your vet will want to know about – and one or more of them could lead to a diagnosis.

These are the most common signs of dementia in dogs:

If you suspect your dog has dementia, a trip to the vet is a good idea. That way, your vet can rule out any other health concerns that may be causing the symptoms.

Once you know for sure, there are several things you can do to help support your senior pup and make their life easier even with the changes to their brain function. There may not be a cure for dog dementia, but there are plenty of things you can do, day-to-day, to help them.

Aside from food and supplements, there are plenty of other things you can do to offer support.

Last but not least – show them love!! As our dogs age, we need to show them we’re there, and that we love them. Spending time with them, whether you’re walking, playing, or just snuggling on the couch, encourages a strengthening of your bond and increases their level of comfort and feelings of safety.

Our senior pups have been with us for the long haul, providing a steady source of support throughout their lives. When they start to show signs of dog dementia, there are plenty of ways we can return the favor.