Can Dogs Have Cinnamon: Safe Amounts and Any Risks? 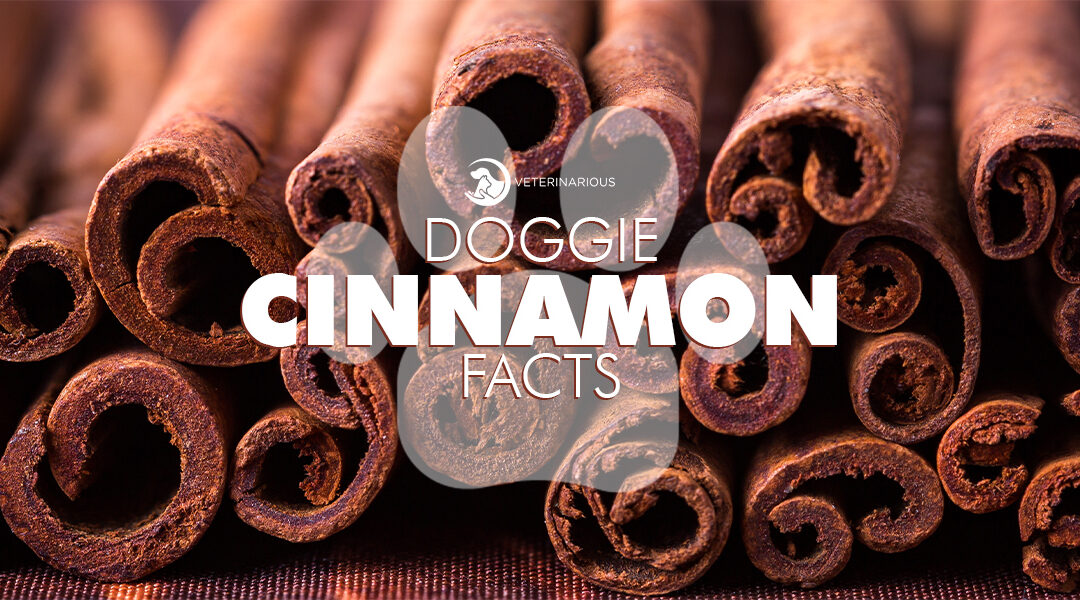 Oh, the smell of cinnamon. That spicy-sweet aroma that reminds you of the holidays. Or fresh cinnamon rolls. Or hot apple cider. Or… ok, now I’m craving sweets!

Even though we may love the taste, what about our pups? Can dogs have cinnamon? Is there anything to be concerned about, or can you just add it to your dog’s dinner bowl?

There are a few pros and cons with a cinnamon – including a good kind and a kind we don’t recommend.

So, before you whip up a batch of DIY dog treats and add a bunch of cinnamon, read this.

The 2 Types of Cinnamon

Cinnamon comes from the inner bark of the cinnamomum tree. It is native to Sri Lanka, India, and Myanmar. It is also cultivated in South America, the West Indies, China, and Indonesia. Strips of the bark are dried until they curl into rolls. That’s how cinnamon sticks form. These can then be ground into powder or made into an extract.

There are 2 different types of cinnamon:

And the type of cinnamon you have is important!

Coumarin is a compound found naturally in several plant species. Its purpose is to keep predators away from the trees and it’s very bitter with a sweet vanilla smell. However, it can be harmful in large doses. Knowing that, can dogs have cinnamon?

Cassia cinnamon, but not Ceylon, is a very rich source of coumarin. Cassia contains approximately 1% coumarin, while Ceylon contains only 0.004%, or 250 times less. This is so low that it’s often undetectable

So, can dogs have cinnamon? Because cassia has so much more coumarin, we don’t recommend it for dogs. With lower coumarin, we consider Ceylon much safer.

Ok, so if we’re going to go with cinnamon, it should be ceylon. So why might you consider giving it to your dog?

Well, cinnamon does offer many wonderful health benefits for your dog, and you as well. The secret to these amazing benefits is most likely because of cinnamaldehyde. Scientists believe this is the compound that’s responsible for the health benefits.

Firstly, cinnamon is rich in antioxidants, which protect against cell damage from free radicals and oxidative stress. Since research links oxidative stress with a ton of different health concern, antioxidants are important. The antioxidants also support brain function, improving focus and memory, which is helpful for aging dogs that may have dementia symptoms.

Cinnamon also have anti-microbial and anti-inflammatory properties. It inhibits the growth of Salmonella, Listeria, and Candida Albicans and can help with swelling and inflammation in dogs with arthritis, sore muscles, and joint pain.

Cinnamon also regulates blood sugar by helping to slow the absorption of sugar in the bloodstream after a meal high in carbohydrates. Kibble tends to be high in carbs, so for kibble-fed dogs, this might be even better! Studies show that cinnamon, given in small doses, can lower blood glucose levels and insulin resistance.

Can Dogs Have Cinnamon? If So, How Much?

Can dogs have cinnamon? Yes, as you can see, cinnamon is safe for dogs if you’re only feeding small amounts, and choosing ceylon to be safer. A good guide for feeding is 1/8 teaspoon for every 15 pounds of their body weight.

And if you do feed it, you want to mix it in really well. When your dog inhales ground cinnamon, mouth irritation, coughing, choking, and difficulty breathing can occur.

If your dog gets into cinnamon from the pantry or chews on a stick of cinnamon, don’t panic. Just keep an eye out. A little won’t hurt, but a lot may cause a reaction. Watch for vomiting or diarrhea, or any noticeable changes in behavior, and call your vet.

It’s also important to note that, while cinnamon can be good, you don’t want to just start feeding all kids of food containing cinnamon. Those cinnamon rolls we mentioned earlier? While they may satisfy our sweet tooth, be careful. Many baked goods contain ingredients like xylitol, an artificial sweetener, or nutmeg, which is a spice to stay away from. If you want to get the benefits, just stick to high-quality ceylon cinnamon mixed in well.