9 Dog Myths: Are You Barking Up the Wrong Tree? 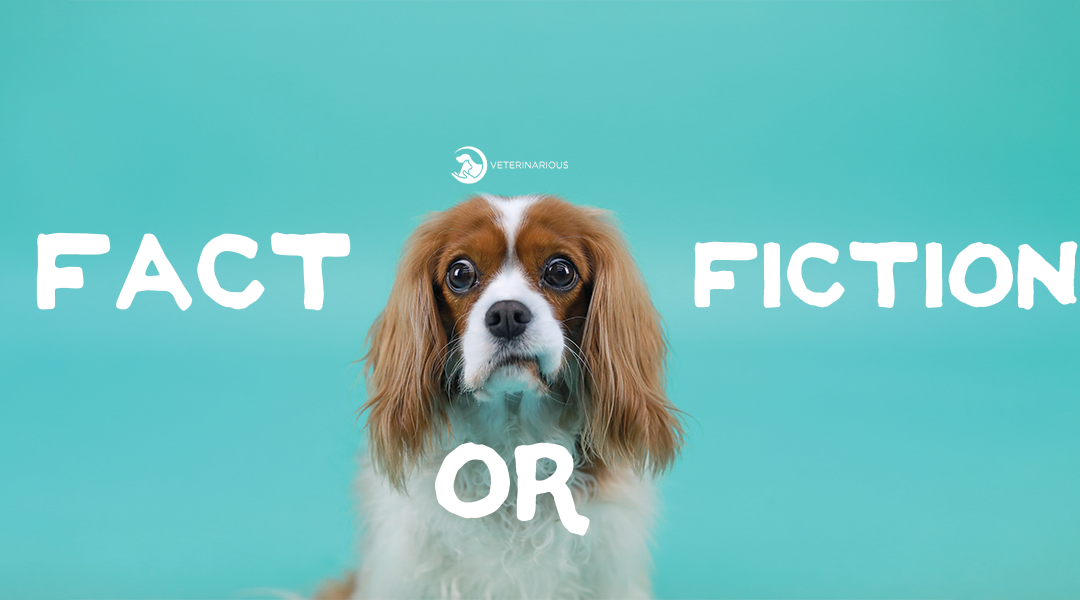 Dogs and humans have lived together for over twelve thousand years man. In that time, we’ve learned a lot about our canine companions – how could we not. However, in that time, certain dog myths and misconceptions have also become ingrained – sticking with us alongside the well established facts.

Some of these are due to a lack of scientific knowledge on what the real reasons for certain behaviors are, but some are actually well debunked thanks to research and study.

So, which of these dog myths do you believe, maybe in full, maybe in part, maybe not at all?

1. Dogs only see black and white and grey. It’s hard to tell exactly where this myth comes from since we can’t see what a dog sees. That said, scientists do know that the canine retina contains 2 of the 3 photo receptor types necessary to see color. Studies have shown that they see several colors, including different saturations of yellow, blue and grey, and other colors, such as red and green, appear faded or indistinct, much the same as humans who are color-blind. The range of color is less than what we see, but based on the research, they definitely see color.

3. A dog’s mouth is cleaner than a human mouth. This is one of the most common dog myths, but we promise, you might want to rethink those slobbery doggie kisses peeps. Your dog’s mouth is not actually any cleaner than your own. It’s still home to all kinds fo bacteria, and most dogs don’t brush as often as humans, so, no their mouths aren’t particularly hygienic. This myth probably comes from the idea that, when dogs lick their wounds, they seem to heal faster, so their mouths/saliva must be cleaning the wound. That’s not actually the case. The reason they heal faster is but because licking cleans away damaged tissue and stimulates blood flow which, in turn, promotes faster healing.

4. Dogs eat grass when they’re sick. It is true that some dogs will eat grass when their bellies are feeling off, sometimes to encourage vomiting. But not always. In fact, experts aren’t entirely sure what the reason is for all that grass eating. Some theories include boredom, anxiety, nutrition (fibre), or even just because it tastes food. It could even be just because it’s a behavior passed down from their lupin ancestors (Plant material has been found in up to 74% of wolf poop samples.).

5. One dog year equals seven human years. This isn’t backed by science at all, and again, is a major generalization. A dog’s age is dependent on many factors such as breed, size and genetics. However, if you want to calculate a rough estimate, as a general guideline, the American Veterinary Medical Association breaks it down like this:

6. A cold, wet nose means a dog is healthy. Wetness, dryness, or the temperature of your dog’s nose can vary with normal daily activities and is not a reliable indicator of health or illness. A healthy dog may have a dry, warm nose, and a dog who is ill might have a wet cold nose. Changes in behavior, a lack of appetite, decreased activity, moodiness, or other symptoms are far more reliable when it comes to assessing how your pup is feeling.

7. You can’t teach an old dog new tricks. For new puppy owners, one of the first things they think about when they bring a new pup home is training. The idea that a new puppy’s brain is like a sponge, sort of like a child, lends well to giving it a good go right off the hop. But, just like humans, as dogs age, they still retain the ability to learn new things. Training is just as good for your older dog as your younger dog to get the mental stimulation and attention of learning. In fact, it’s a good way to keep your dog healthy – you’re working out her brain! Older dogs often still love to learn and be rewarded just as much as puppies do.

8. A yawning dog is a tired dog. Just as with humans, the reasons a dog might yawn are not fully understood. Most experts believe that a yawn could mean a few different things. Firstly, yawning for dogs is considered a way of dealing with anxiety and reducing stress. You’ll often notice a dog yawning when they’re uncomfortable. In that same vein, dogs often yawn as a sign of indifference, to show pacification, for example when being confronted by an aggressive dog, a yawn shows they have no desire for conflict.

9. You should shave a dog in summer to keep them cool. Many dog owners shave their pets in the summer thinking that it’s the right way to keep them cool. This is actually one of the worst things you can do! Dogs have something called an undercoat. In winter, it becomes thicker and protects the dog from the cold. And in spring, when the dog loses their hair naturally, there’s an undercoat so that the animal feels comfortable. If you shave a dog’s fur, the structure of the new fur will be disrupted — it may curl or get entangled. Plus, exposed skin can burn in the sun, which is another problem all on its own. Grab an umbrella and a kiddie pool and put away that shaver.

Like all myths, these have developed out of some idea or theory that may hold sway, and is usually quite believable. Despite the science that disproves them, so many of these dog myths still prevail. Even long time dog owners still go by one or more of them.

So, the next time someone tells you one of these things, you can fill them in on just what a certain behavior or attitude means! The more you know, right!